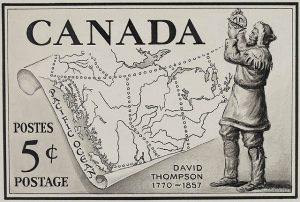 It’s not a name that stands out in the annuls of Canadian history, but in his lifetime he mapped an astounding 3.5 million square kilometres of wilderness. Thompson is widely regarded as the greatest land geographer ever.

In 1835, at the ripe age of 65, David Thompson arrived in the Bancroft area. For thousands of years, the region was a hunting and harvesting area for Canada’s First Nations Peoples. Vast, complex waterways were primary trade routes, navigated by the voyageurs and couriers du bois upon their arrival to the new land.

By the 1850s, the County of North Hastings was surveyed and the Hastings Road built. Land was divided into 100-acre lots, advertised in Great Britain for “free” to brave souls willing to agree to a few simple, yet back-breaking conditions: Clear and cultivate twelve acres; Erect a log-house; Settle for a minimum of four years.

Two young, well educated gentlemen from England answered the call –  James Cleak and Alfred Barker. Despite no inclination for the hard labour of clearing the land, both somehow succeeded in fulfilling the conditions. As a reward, Mr. Barker nominated himself to be the first Clerk of the combined townships of Faraday and Dungannon. Mr. Cleak, became the first Postmaster of the settlement area, then named York River.

Yet is was the arrival of an energetic, extroverted Senator with a reputation as a “closer” of large land deals in various townships that served as the true beginnings of modern day Bancroft. Billa Flint persuading a number of skilled tradesmen to move to York River, building the prosperity of the town and his considerable influence in it. So powerful was Mr. Flint that he succeeded in getting the town renamed Bancroft, which just happened to be his wife’s maiden name.

For decades the trains transported both people and goods to Bancroft, a much better option than traversing the rocky and bumpy roads. In December 1904, Bancroft was incorporated as a village. Lumber was the main enterprise of the time, anchored by Bronson and Weston Lumber Company establishing its headquarters in the area.

As the lumber industry slowed, mining served to usher Bancroft into a new era. Some 1600 different mineral species have been identified on the Canadian Shield running from Madoc through Bancroft to Wilberforce. Iron, copper, graphite, sodalite, corundum, granite, mica and feldspar mines operated successfully for years. The Faraday Uranium Mine operated from 1954 to 1964, reopening as the Madawaska Mine in 1975, remaining an active producer of ore until 1982. When the mines were prosperous, Bancroft benefited from an economic boom, earning the title “Mineral Capital of Canada”.

In 1999, the Village of Bancroft merged with Dungannon Township to form today’s prosperous Town of Bancroft. The old train station in Bancroft served as the Chamber of Commerce and Mineral Museum until it was moved and restored to house the Bancroft Gem and Mineral Club’s museum and Municipal office.

Today, Bancroft is widely considered as an undiscovered gem for urbanites escaping crowded cities, cottagers, campers, hikers and outdoor enthusiasts, offering a relaxed lifestyle surrounded by natural splendor. Dominated by the towering Eagles Nest cliff that offers a breath-taking view of the York River Valley, Bancroft is home to the legendary Heritage Trail, is a gateway to Algonquin Provincial Park and is nestled amongst a plethora of spring-fed fresh water lakes. A vibrant arts and entertainment scene add to the charm of this special place.

David Thompson, the great land geographer, would be proud.